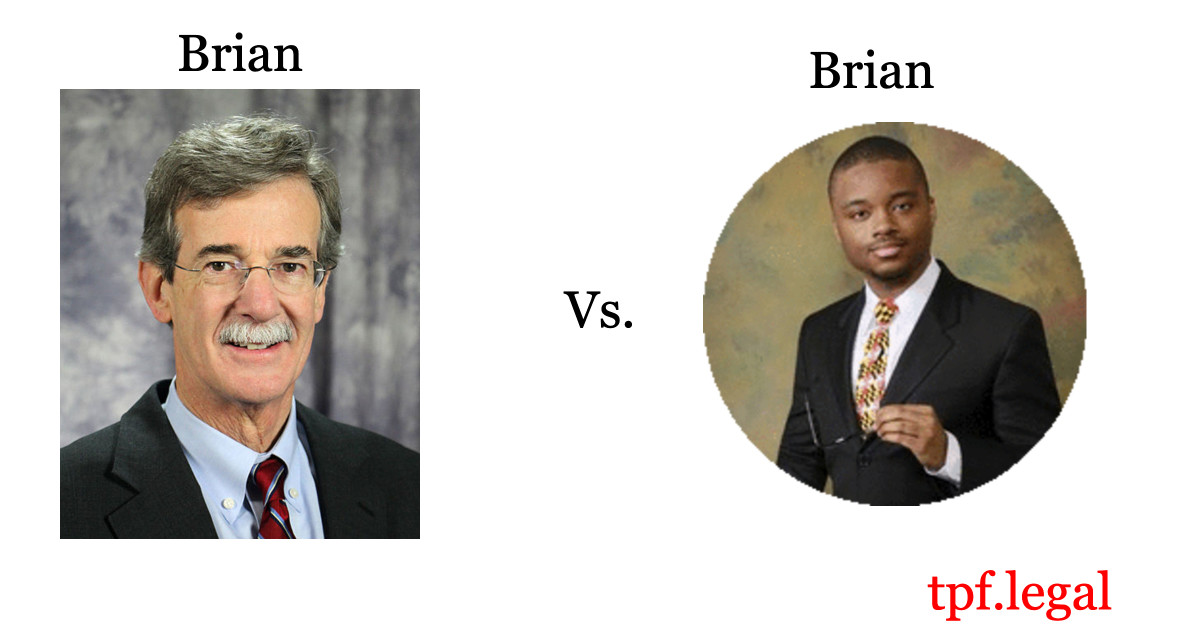 That said, I do possibly have a few biases that readers should keep in mind:

(1) I represent both landlords and tenants. However, of the two I tend to represent mostly landlords, particularly small landlords. I could be viewed as if I’m a landlord advocate that is advocating for landlords. I’m not, I’m just expressing my thoughts on the issue.

(2) As the Attorney-General pointed out in his article, families headed by black men have 51% higher eviction rates than their white counter parts. I am a black man (that will one day have a family of my own). I find it disturbing that minorities are more likely face eviction. So I could be viewed as if I’m a tenant advocate that is advocating for minority tenants.

Of the two aforementioned biases, the second one greatly outweighs the first. I don’t plan on being an attorney forever. But I’ll always be a black man.

I think that the solution the attorney general proposed of raising the rate to file an eviction in Maryland from $15 to $120 will not help minority tenants. This will lead to more evictions. The reason being is landlords will be able to afford these costs, and tenants will not. Court costs get passed on to tenants and they will not be able to afford the bill. For example, a chronic late payer that is late three times will have to come up with $360 instead of $45. The vast majority of eviction filings are repeat filings.

I’ll also take this time to address bias #1, because it could be viewed that I am taking this position to protect my own source of income as a “landlord advocate”. My attorney’s fees and the filing expenses are billed separately. My income will stay the same whether or not the price to file is raised. And I’man entrepreneur so even if it affected my income I’ll just pour my resourcefulness to find something more profitable to do.

Now that we got that out of the way, I’ll be replying to the Attorney General’s arguments from his article, by quoting him and then replying to the quote. Lastly, at the end I will propose my own solution. It’s easy for me to watch a sporting event from the comfort of my own home and to criticize the solutions proposed by the coach. It’s another thing for me to be willing to step into the right and put forward my own ideas to have them picked apart too.

My Thoughts On The Attorney Generals Arguments

“Over 660,000 eviction cases are filed each year in Maryland. The filing rate in some counties is over 100%, meaning more eviction actions are brought than there are homes for rent.” ~ Attorney General

Another way of wording this is that chronic late payers are driving the rates of evictions up. ~ Attorney P.“ Baltimore City has 125,000 rental units, but roughly 140,000 eviction cases per year. About 6,500 result in removal. Why the discrepancy, and what happens to all the other cases?” ~ Attorney General

This discrepancy is a good thing. The tenants aren’t evicted. ~ Attorney P.

“The answer is that landlords, particularly large corporate property owners, increasingly use eviction filings not to displace tenants, but rather to collect rent.” ~ Attorney General

No. They use failure to pay rent actions to enforce their lease agreements. This is the lawful mechanism for them to do that. This results in either the tenant being displaced or the tenant paying rent. ~ Attorney P.

“The expense of vacancies, repairs and finding new renters is greater than filing actions to put pressure on existing tenants.” ~ ~ Attorney General

The expense of a non-paying tenant is the greatest of all to landlords. Landlords would rather find new renters than have to put pressure on existing tenants. ~ Attorney P.

Landlords do not profit by filing legal actions against their tenants. If they are lucky they will break even. ~ Attorney P.

“In most states, eviction begins with notice to the tenant. Tenants then have a chance to seek rental assistance, work out payment plans or find other housing before the hammer of judicial process falls. But in Maryland, the first step is an eviction filing in court.” ~ Attorney General

Due to Court delays related to Covid-19 it is taking the hammer of justice months to fall. I filed a failure to pay rent action in Baltimore City in November and the hearing is not until March of 2021. My small landlord client will be suffering until then. Under normal circumstances, it take about three to four weeks to get a hearing date for a failure to pay rent action in most jurisdictions in Maryland. ~ Attorney P.

“The landlord’s cost of filing is $15, one of the lowest nationwide. Some states impose fees over $300; the average is $122. Filing for eviction in Maryland costs landlords virtually nothing, and too many take advantage of the process.” ~ Attorney General

Surely you’re not going to suggest that we raise the price for Maryland landlords to file would you? Because they’ll gladly pay the price. The cost will be passed on to tenants as a reasonable expense to enforce the lease agreement. ~ Attorney P.

“The landlord’s calculus is simple. Why rely on traditional methods of rent collection when the weight and resources of the judiciary can be invoked so easily instead?” ~ Attorney General

The civil system is supposed to be used to resolve civil disputes. ~ Attorney P.

“Eighty-four percent of Baltimore City eviction actions are filed with only one month’s rent due. Worse, many landlords file as soon as tenants are a few days late.”~ Attorney General

It’s not worse that a landlord files as soon as a tenant is a few days late. It’s the prudent thing for landlords to do. Right now it’s taking 4 months to get into court due to Covid-19. I’m expecting it to increase. It takes maybe 3 – 4 weeks after a court date to get an eviction scheduled. After that it takes anywhere from 2 – 8 weeks for an eviction to be carried out depending on the jurisdiction. So even if a landlord files as soon as the tenant is late they could end up being owed 6 month’s rent. If a landlord delays, even more. ~ Attorney P.

“Our eviction process is out of balance and unfair to tenants. I intend to ask Maryland lawmakers to increase our eviction filing fee to at least the national average of $120.”

I agree with you that this will resolve the “discrepancy” you described earlier. Landlords will be able to pay this $120. The chronic late payers will not be able to afford it. This will result in a lot more evictions. Discrepancy solved. Be careful what you wish for.~ Attorney P.

“We should also make landlords provide notice of their intent to evict before deploying the machinery of judicial process.” ~ Attorney General

I agree. I just think we disagree on what’s a “legitimate” eviction case. A legitimate eviction case for a tenant occurs when they (a) fail to pay rent or (b) holdover without permission from the landlord.~ Attorney P.

“But eviction actions should not be used to turn our court system into a debt collection agency for landlords.” ~ Attorney General

It’s not. It’s a lease agreement enforcement mechanism. It’s not comparable to a debt collection agency where simply money is owed. The tenant has possession of the landlord’s property which is worth a lot more than the money owed.~ Attorney P.

“Eviction is not simply a condition of poverty. Rather, it’s a root cause, perpetuating a cycle that can last for generations. It means loss, not just of a home, but also of possessions, school, community, employment, mental and physical health, and the ability to find another place to live.” ~ Attorney General

No. Eviction is not a root cause of poverty, it is a symptom of poverty. Think about it. Does stopping eviction stop poverty? No. Does stopping poverty stop eviction? You bet it does.~ Attorney P.

As you stated, most eviction filings don’t result in an eviction. And landlord’s filing as soon as they are able to is a good business practice. The exception to that may be if the tenant is forthcoming and trying to make payments. Otherwise, long-lasting harm will be done to many small minority landlords when they are no longer able to afford the mortgage on their properties. I’m mentioning that minority landlords are suffering just to illustrate the point that landlords are suffering as well. As a landlord-tenant attorney I see both sides. Small black landlords and black tenants that are suffering call my office everyday.~ Attorney P.

“In Baltimore, the number of Black household eviction removals is three times that of whites. Eviction rates of families headed by Black men are 51% higher than those of their white counterparts. Among the laws and policies that perpetuate systemic racism and cycles of poverty, allowing landlords to hijack the state’s judicial process for rent collection ranks high.” ~ Attorney General

Small black landlords are unable to pay their mortgages because they have to wait too long to get relief from the judicial system as it is. I think making the process even more burdensome could end up making the creation of black wealth all the more out of reach. Large landlords will adapt to these changes just fine.~ Attorney P.

“Forced displacement disrupts lives in profound and irrevocable ways. Its harms fall disproportionately on those least able to weather them. As one writer captures the impact of eviction, “without stable shelter, everything else falls apart.” We must do more to help Maryland families keep things together.” ~ Attorney General

I agree but raising the rate for landlords to file for eviction definitely isn’t the solution. Those costs will be passed along to minority tenants that we’re both trying to protect. ~ Attorney P.

Part Three: My Proposed Solution For You To Pick Apart

If you made it this far thank you! Even if you disagree with me, it shows you care enough about my ideas to consider them. I appreciate you. Feel free to leave a comment picking my solution apart. I want you to. I think each County should create a Department of Eviction Diversion (DED). For example, Prince George’s County has a Department of Permitting, Inspections, and Enforcement (DPIE) and it handles matters related to licensing and housing. The Department of Eviction Diversion’s main objective can be to Divert Evictions. It’s in the name.

A “mechanism” needs to be put into place so tenants are made aware of DED shortly after a lawsuit is filed. DED can contact the landlord well before the Court date to attempt to work out a resolution. As an attorney that represents both landlords and tenants, it’s always better to work out a solution outside of court if it’s possible. On the day of Court it’s almost too late.

By restoring communication between the landlord and tenant well before the hearing date, we’ll increase our chances of working at a solution other than an eviction. We want to avoid an eviction at all costs because of the social and economic consequences. The mediator for DED can attempt to work out an out of court settlement agreement such as a payment plan, cash for keys agreement, etc. DED can also help tenants apply for rent relief programs, and DED can use it’s own funds to help tenants pay their rent, or to incentivize landlords to accept a settlement.

For example, the tenant and landlord could agree to a payment plan where the tenant is paying 50% of the past due amount in installments and DED pays the other 50% upfront.

So that’s my solution. Unfortunately it doesn’t solve for poverty but I think it’s a step in the right direction. Now do me a favor and pick it apart and propose better solutions. 🙂

Latest posts by Brian (see all)

Consult With Me
Book Me